Human rights activists joined more than fifty members of the community last week at the city council meeting in Manteca, CA. The group rallied outside the council chanting “RSS 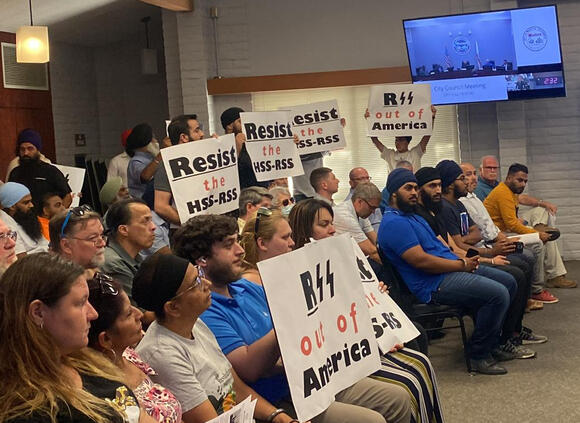 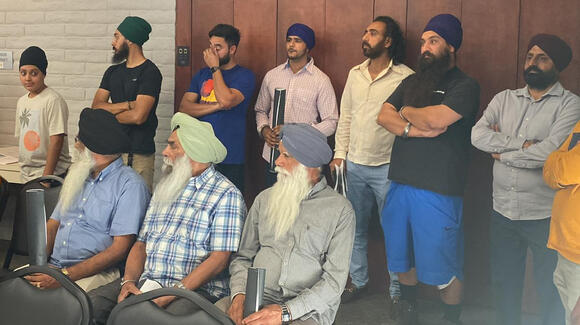 Manteca, California- At last week’s council meeting, several community members and activists stood up during the public comment session and questioned council members about their knowledge of HSS and RSS and the proclamation that was received by the HSS in January.

A representative of the Islamic Center of Manteca reiterated that HSS “doesn’t like to advertise it to city officials when seeking a pat on the back from you.”

Even if the council didn’t know what the RSS is or that HSS is the international wing of the RSS, a basic google search would reveal that the RSS is a violent, xenophobic outfit with a long track record of extreme anti-minority violence,” said community activist Pieter Friedrich. “It’s disappointing that the city didn’t bother investigating the HSS before applauding it.” Noting that the RSS has “systematically slaughtered Indian Christians and Muslims on numerous occasions” and “wants to wipe out Sikhs, Buddhists, and, indeed, all religious minorities in India,” Friedrich explained that the HSS serves as a propaganda mouthpiece for the RSS, promoting its agenda internationally.”

“The HSS is a partisan Indian political outfit,” Brian Wright told the council. It is the international branch of the RSS, the oldest, biggest, and most rapidly expanding fascist movement in the world. The HSS-RSS has no place in this world, let alone on our free American soil. Given that the RSS is about to carry out genocide in India, you should be ashamed of yourself for supporting the HSS,” he added.

Vice-Mayor Charlie Halford stated, “We got a little mud on our face on this one.” He added, “I mean, we kind of proclaimed and awarded a group we probably didn’t want to. Without a doubt, we shouldn’t have done it. It took two-tenths of a second to look up the RSS online. The city council acknowledged that they may have made a mistake and needed to establish a better protocol for vetting the groups before proclamations. Council member Gary Singh mentioned the possibility of rescinding the proclamation based on the information that was given to the council members at last week’s meeting.

Attempts to reach the mayor have been unsuccessful. Check back later for updates on this story.